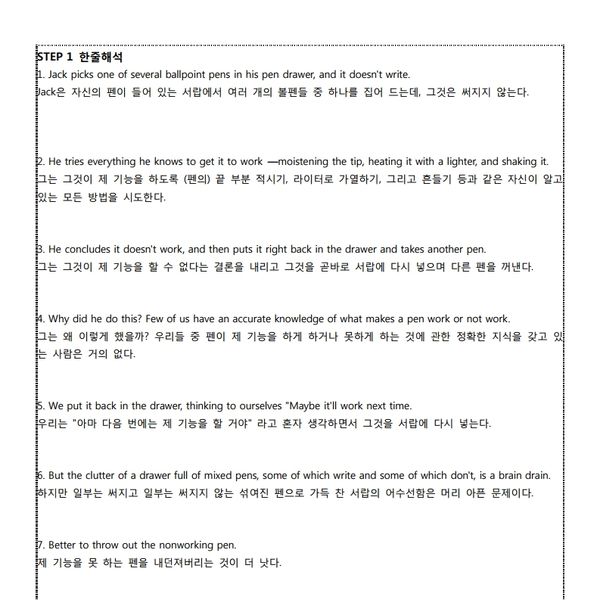 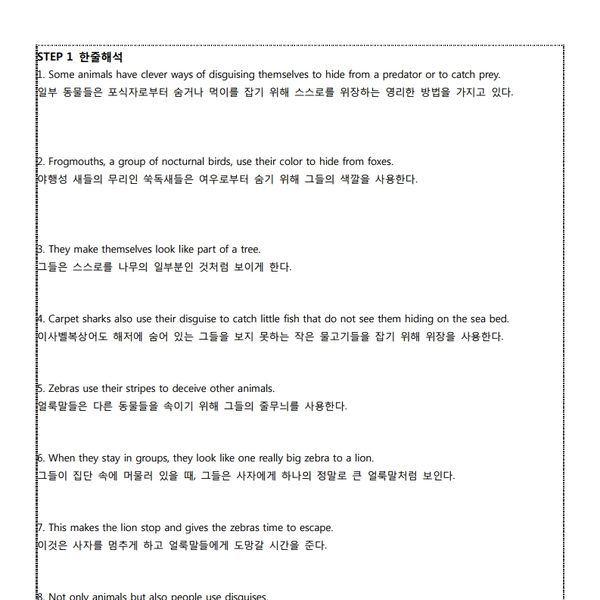 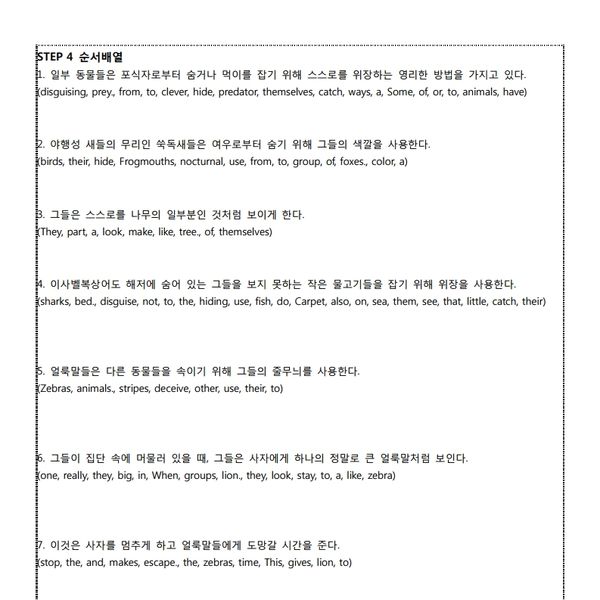 1. Jack picks one of several ballpoint pens in his pen drawer, and it doesn't write.

2. He tries everything he knows to get it to work —[moistening/drying] the tip, heating it with a lighter, and shaking it.

3. He [concludes/commences] it doesn't work, and then puts it right back in the drawer and takes another pen.

4. Why did he do this? Few of us have an [accurate/inaccurate] knowledge of what makes a pen work or not work.

5. We put it back in the drawer, thinking to ourselves "maybe it'll work next time."

7. Better to throw out the [nonworking/working] pen.

8. Or, if you just can't stand the thought of that, designate a special box or drawer for recalcitrant pens that you will [attempt/fail] to reform someday.

1. Some animals have clever ways of disguising themselves to hide from a predator or to catch prey.

2. Frogmouths, a group of nocturnal birds, use their color to hide from foxes.

3. They make themselves look like [part/whole] of a tree.

4. Carpet sharks also use their [reveal/disguise] to catch little fish that do not see them hiding on the sea bed.

5. Zebras use their stripes to [deceive/assist] other animals.

6. When they stay in groups, they look like one really big zebra to a lion.

7. This makes the lion stop and gives the zebras time to [stay/escape].

8. Not only animals but also people use [disguise/reveal]

9. Soldiers wear outfits with colors and patterns designed to [match/clash] the background scenery in [order/disorder] to hide from enemies.

1. In Plato's book he [argues/disagrees] that writing will not help in the search for truth.

2. He says writing is like paintings: paintings look like living beings, but if you ask them a question, they [remain/cease] silent.

3. If you ask written words a question, you get the [same/different] answer over and over.

4. Writing cannot distinguish between suitable and [unsuitable/suitable] readers; it can be [ill-treated/well-treated], but it cannot defend itself.

5. In [contrast/comparison], claims of truth made during a live argument can defend themselves.

6. Thus, the spoken is [superior/inferior] to the written world.